A controversial new laboratory company specializing in “advanced cardiovascular risk testing” is developing an innovative, highly profitable– and legally dubious– new business model. Details of the scheme are spelled out in a “Management Presentation” slide presentation sent to me by a confidential source. The slide presentation, according to my source, is  being shown by executives at True Health Diagnostics (THD) to investment bankers and private equity funds in order to convince them to invest in the company or to buy it outright.

THD was founded in 2014 and has grown rapidly in a very short time– the slide presentation suggests that it now may be worth $450 million. Early on it gained a reputation as “the new Health Diagnostic Laboratory (HDL),” the scandal-ridden and now bankrupt and defunct laboratory company. THD, which bought the remaining assets of HDL in bankruptcy court, initially appeared to copy HDL’s business model, which relied on kickbacks to physicians in the form of excessive phlebotomy fees and promises to not demand payment from patients if their charges were not reimbursed. Earlier this year I reported on emerging evidence that THD was moving beyond the HDL model and was developing novel strategies to sell their tests, including the use of independent third-party phlebotomy services, in-office laboratories, and partnerships with small hospitals.

The THD presentation, which is not intended for public dissemination, describes the full blossoming of this strategy. It is “yet another profit generating model in an already questionable business,” according to one of my sources, a highly knowledgeable lab industry expert.  “In this new model THD routes its testing through small rural hospitals to generate inflated payments that these small hospitals receive.  In fact, by siphoning its tests through these rural hospitals, THD is able to generate 70% more profit on the exact same tests,” he commented. 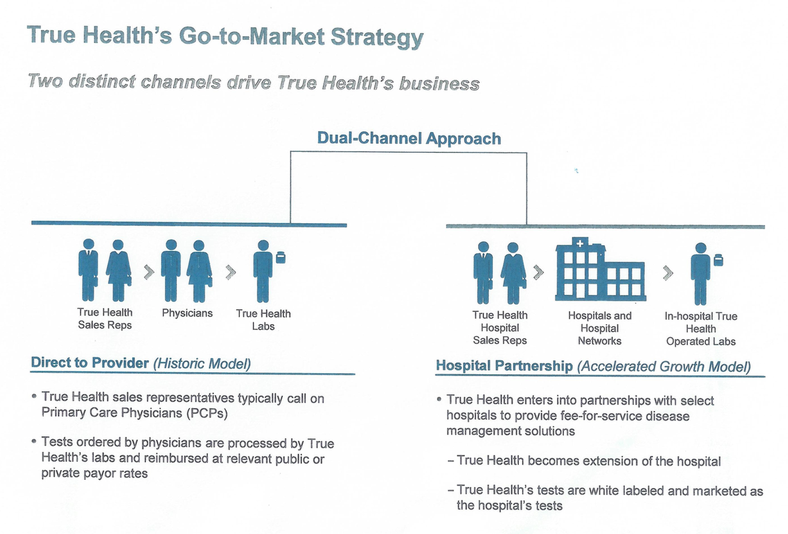 THD appears to have struck gold with these rural hospitals. The slide presentation indicates that the share of hospitals in its “Payer Mix” has increased from 4.7 percent in January of this year to 41 percent in September.  “This is is a remarkably fast transition of a payor mix and reveals a scheme that many industry observers believe is nothing but a clever ‘money laundering’ tactic to both inflate its billings and to dodge Medicare fraud investigators,” according to my source.

The slide presentation, which has been delivered by THD founder and CEO Chris Grottenthaler and other executives, focuses largely on the enormous revenue potential of the hospital market, relying in particular on small hospitals with 50 beds or less. 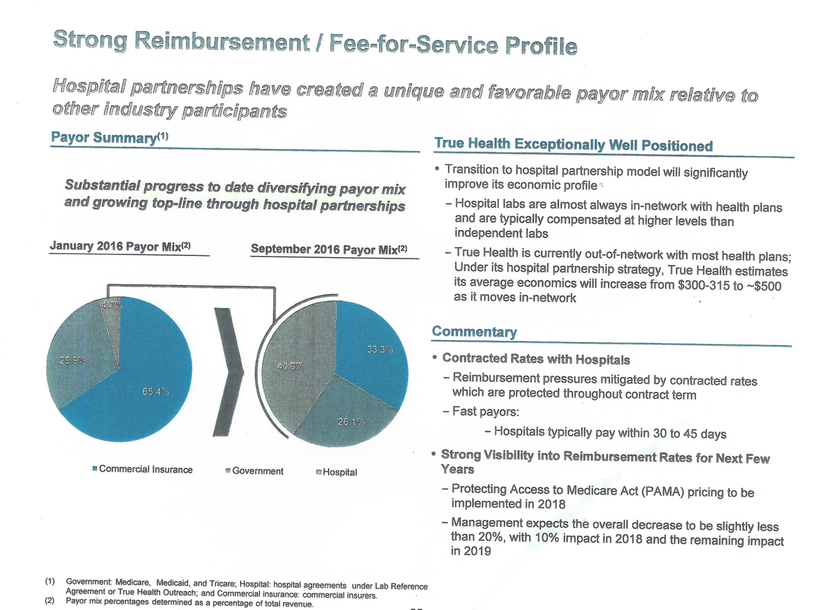 One major advantage of hospital labs is that, as the slide presentation points out, “hospital labs are almost always in-network with health plans and are typically compensated at higher levels than independent labs.” According to one of my sources, “commercial payers would never contract directly with THD,” and even if they did, they would never reimburse at the same high rates. The slide presentation also makes this point: “True Health is currently out-of-network with most health plans; Under its hospital partnership strategy, True Health estimates its average (per patient) economics will increase from $300 to $500 as it moves in-network,” which works out to a 70% increase in payment “on the exact same tests for the exact same patient,” my source notes.

Here is a detailed analysis of the scheme, as outlined in the slide presentation, explained by my source:

“This is gaming the system at its worst. This new hospital payer tactic is simply a means to use the higher revenue reimbursement rate hospitals receive to help the company stay off the radar of Medicare and private commercial insurance investigators. Otherwise, the original HDL model hasn’t changed at THD. It is still built on these 3 core tactics:

An important aspect of the scheme is that many or most of the patients being tested in the hospital labs are not hospital patients, despite Medicare requirements that most patients billed through hospital labs be actual hospital patients. “THD is simply funneling its testing through these satellite labs,” according to my source. The company essentially admits this in the slide presentation: “True Health’s tests are white labeled and marketed as the hospital’s tests.” 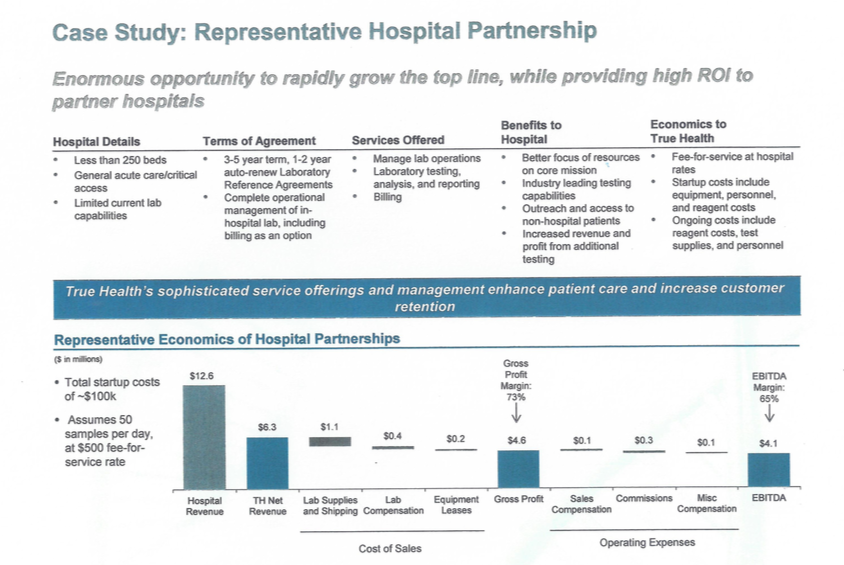 The scheme turns out to be highly profitable, both for THD and the hospitals. A case study in the slide presentation gives the example of a new lab in a 250-bed hospital. On a projected annual revenue of $12.6 million, THD pockets half, or $6.3 million. The hospital swallows the expenses but still makes $4.1 million, a 65% profit margin. By contrast, my source notes, the average overall profit margin for non-profit hospitals is 2.2%, though most non-profits never even achieve a profit.

Independent laboratory companies typically sell for 3 times their current revenue, according to my source. In the slide presentation, THD states that it anticipates almost $150 million in 2016 revenue, suggesting that the company could sell for $450 million now. It is worth bearing in mind that THD bought the assets of HDL just over a year ago for $30 million. If they sell for $450 million, that would work out to a 15-fold return in less than 18 months.

The slide presentation “is just red meat for unsuspecting investors,” my source commented. “Healthcare savvy investors—like large, credible companies– would probably run away from it because the company is achieving profits that simply are not credible–if you’re playing by the rules.” He notes that THD averages more than 30 tests per patient, which is ten times the national average. THD is reimbursed $300-$600 per patient, while Quest and LabCorp average about $30-$50 per patient. “If you have any knowledge of the lab industry, you wouldn’t touch this because it’s just a matter of time before it collapses.” 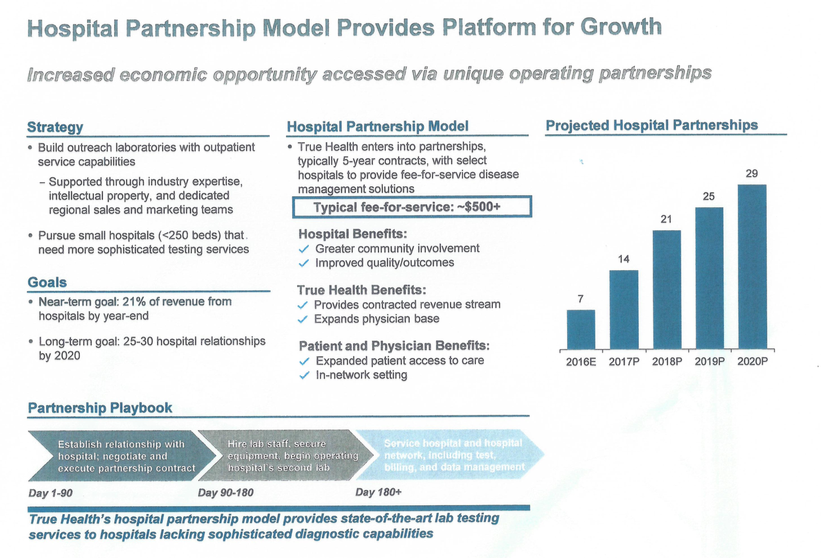 In a statement THD denied that it was routing tests through hospitals. “We work with hospitals in two ways: one is we serve as a reference lab, because our capabilities go beyond those of most hospital labs. In other cases, we are contracted to help manage hospital lab operations.”

THD also said that “it is absolutely not true that True Health Diagnostics has been unable to reach contracts with most commercial payers. In fact, an increasing number of payers are adding us to their networks. What is new is that True Health has created a separate business to help hospitals manage their labs, just like Quest Diagnostics and many other companies have done for years. Regarding ‘white label’, the tests are labeled as the hospital’s, because they are the ones that own and run the hospital lab and because they offer a similar range of testing, but now under their own name.”

THD also said that, like any laboratory, it “is not responsible for determining whether a patient needs a test. Determining medical necessity is up to the physician. We do have a strict medical necessity program, and we comply with all federal guidelines. In fact, if someone orders a test that is not medically necessary, in the end, we lose money by running a test that we don’t get paid for.”

The company also responded to the charge that patients being tested in hospitals are not hospital patients: “When hospitals request our services for their patients, the hospital oversees the registration for that patient. We do not have any involvement in registering patients for hospitals – we receive orders from hospitals and run the tests they request.”

THD also defended its use of a broad panel of cardiovascular biomarkers: “CardioBrief has previously published one of our sample reports, so your readers are aware that it provides a detailed analysis of biomarkers. The reason physicians may order this number of tests is that conventional lab work that has been done for 40 years has not been successful – a simple review of the number of Americans who died suddenly of a heart attack and the increasing number of Americans afflicted with diabetes bears witness to that. In fact, the Centers for Disease Control reported just today (Dec. 8) that the nation’s mortality rate rose in 2015, driven by an increase in deaths from heart disease. Physicians want to prevent this, so we offer tests that help detect disease early enough that it is treatable, not fatal. We offer tests for multiple disease categories, and some of the best, most-skilled physicians in the United States use our tests to determine disease risk earlier than previously possible, so that they can address the risks with wellness programs or other interventions that are significantly less costly than surgical procedures.”

THD also denied reports that the company does not pursue payment from patients. “We submit bills to our patients and pursue payment. We have extensive records that document our collection efforts, consistent with our compliance program. We maintain detailed call records and recordings that disprove this assertion.”

Finally, THD objected to the use in this story of the company’s slide presentation:

True Heath does not consent to your possession, review, copying, publication, dissemination or use of the information that you have, which was given to you in violation of a non-disclosure agreement. True Health is  prepared to take all steps necessary to protect its confidential and trade secret information, to file legal actions against anyone improperly possessing, using or disseminating such information, and to seek recovery for any loss or damages resulting from the use of dissemination of such information.